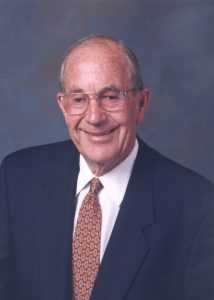 The Gerald E. Bruce Award was established to recognize Ford Alumni who have unselfishly worked to better their communities. Gerry Bruce was an original member of The Ford Family Foundation Board of Directors. He was a risk taker and a very involved citizen of Douglas County. After his death, this award was established in his memory to recognize Ford Alumni who are community leaders and who exhibit loyalty to the Foundation’s core values of integrity, stewardship, respect, independence and community.

The Foundation seeks applicants from our alumni who represent Gerry Bruce’s qualities and vision of leadership, including:

The awardees are recognized with a plaque, and a donation of $5,000 made to a non-profit organization of the awardee’s choice.