Harper, a Ford Scholar from the Class of 2007, began working at the Scholarship Office in June 2011. She began her current position on Nov. 1, 2014. Her primary responsibilities include supporting Director of Postsecondary Success Denise Callahan and the administrative management of the Scholarship Office. Other duties include program research; database queries and reports; communicating with Friends of the Foundation; scheduling and meeting support; and supervising student workers.

Harper, 25, believes in the mission of the FSAA and said, “As a Scholar, I would like to become more involved with the FSAA service projects in my area.”

She graduated from Oregon State University in 2012 with a Bachelor of Science in liberal studies and event planning. She is an avid Beaver and Denver Broncos football fan. She likes gardening, planning events and volunteering.

Harrington, 24, was born and raised in southeast Portland. In 2013, she earned a Bachelor of Arts from the University of Oregon in international studies with a concentration in international relations and diplomacy. She also earned minors in business administration and German. After graduating, she spent the following year teaching English in Vӧlkermarkt, Austria, through the Austrian-American Educational Commission. She has visited 17 European countries and also lived in Germany. She recently moved back to Eugene and worked as a night audit at the Hilton Garden Inn before joining the Foundation.

Harrington said she is passionate about higher education and helping students. “The Ford Family Foundation gives students the tools they need to achieve their dreams.  I wanted to work for an organization that has a positive impact on the community and that helps change people’s lives for the better.”

Harrington believes it’s important for Ford Scholars to stay connected and says the FSAA helps Scholars keep in touch, foster relationships, and give back to their communities. “Ford Scholars are a tight-knit community comprised of great people who have shared similar experiences,” she said. “Being a Ford Scholar doesn’t end when you graduate. There is a network of people there to help you throughout your life.”

Harrington enjoys traveling, hiking, biking, drinking coffee and tea, cooking, watching UO athletics and hanging out with friends and family. She has a pet cockatiel named Buddy and is a huge UO Ducks fan. 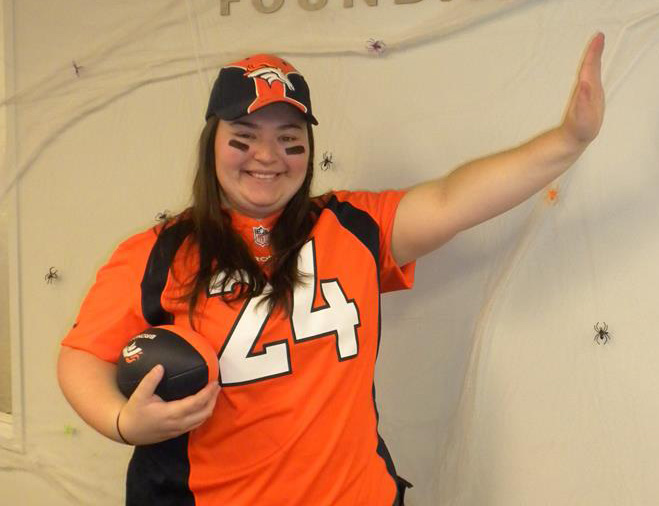