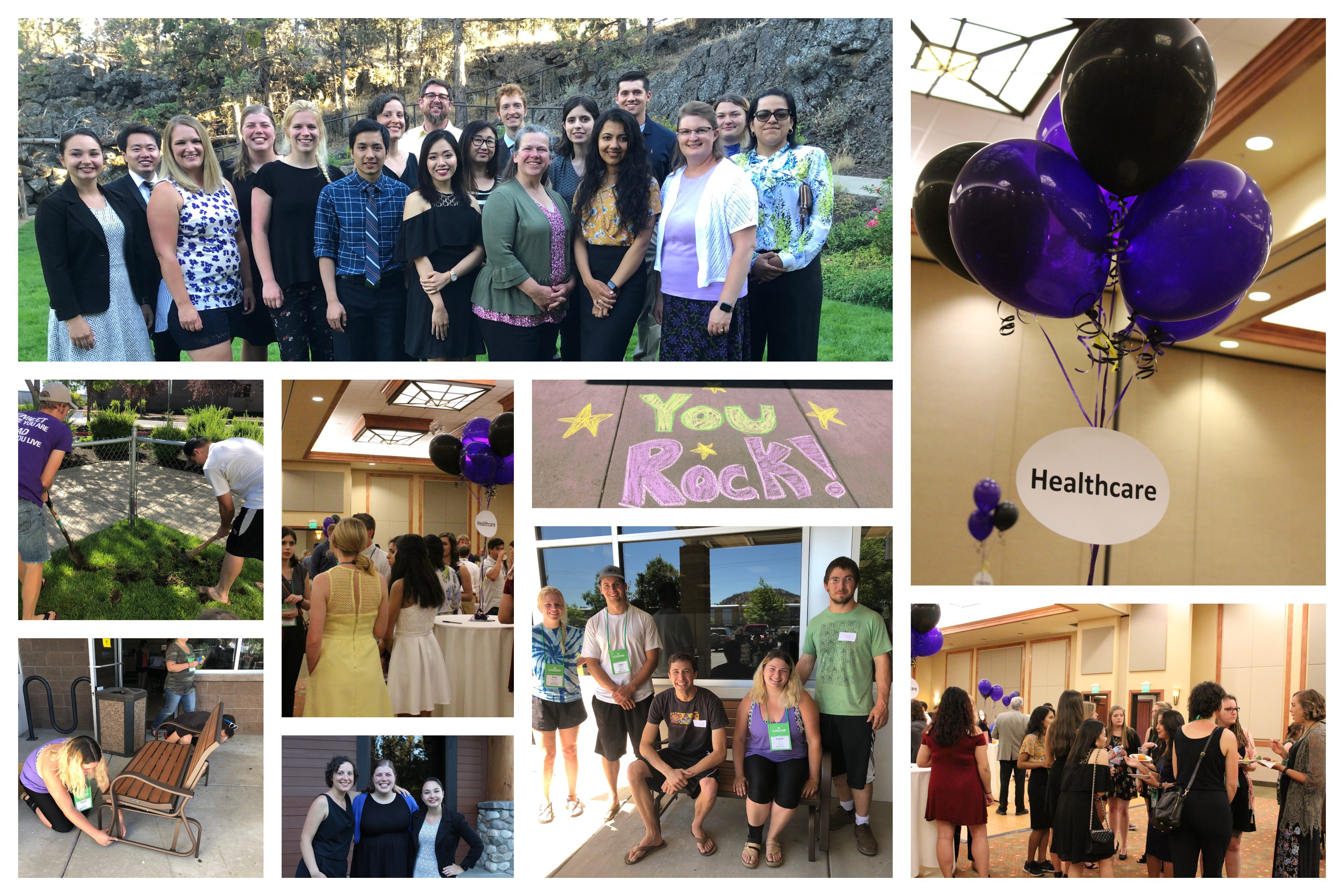 “I was really impressed with the turnout from the alumni. This is obviously my first time planning a service project, so I had no idea what to expect,” said newly elected FSAA board member Kinara Fender.

A total of 21 alumni and 13 guests gathered at the Bend Department of Human Services office at 10 a.m. that day to help beautify a play yard for foster children.

“We planted a sensory garden with some low-maintenance, sustainable plants and perennials that either look really pretty or are really nice to touch or to smell for the kids to experience and then some trees for shade,” Fender said.

Fender, who came from Portland with her family for the event, found a gardener who was willing to donate the plants, and she was able to get a Bend nursery to sell two trees at discount.

FSAA Vice President Aimee Fritsch, who hauled the tall trees to the site in her vehicle, said she enjoyed doing some hands-on work at DHS.

“I’m so thankful we had a couple of folks with a good knowledge of how to plant things and how to break through the rock layer and how to artfully arrange the grasses,” she said.

Additionally, two alumni worked together to assemble a glider bench for the play area.

“One of the needs that my contacts at that office had expressed was just that the outdoor play area, which is where the biological families get supervised visits with their kiddos, was not a very welcoming space,” Fender explained.

Alumni seemed to have just as much fun as the visiting children, drawing on the sidewalk and creating heart-shaped designs on the chain-link fence.

Fender had mentioned connecting with DHS during a recent board meeting. She works with a lot of DHS-involved families when she teaches community health nursing.

“It dovetailed nicely with The Ford Family Foundation’s mission and some of the work that they’ve done, and then just supporting DHS,” Fender said. “There’s lots of potential for partnership in the future.”

Fritsch works in the DHS state administrative office in Salem.

“I hear a lot about challenges in the fields, so it was super cool to actually do something physical to make this a little bit better,” she said.

After two corner sensory gardens were completed and the sidewalk was decorated with welcoming words and cheerful designs, the alumni and their families headed to nearby Juniper Park for a catered lunch.

Some visited around the picnic tables while others played yard games or swam in the neighboring pool.

Alumni then attended a meet and greet networking and professional development social gathering with current Ford Scholars at The Riverhouse on the Deschutes Convention Center.

According to Bonnie Williams, Manager of Scholar and Alumni Engagement at the Foundation, “The meet and greet is a such a fantastic opportunity for alumni to connect with current Scholars and discuss different career paths and get some guidance and informal mentoring. We’re so grateful to the alumni for making time for this event and the community service event earlier in the day. They’re not only contributing to their community, but inspiring the next batch of alumni to do the same.”