Chris Schulze On April 18, 2013, Chris and his wife, Noelle, welcomed their firstborn, Adelade Marylynn Schulze, into the world. She is a delightful and precious addition to their family.

Ann Strahm Ann received tenure and was promoted to assistant professor of sociology at California State University, Stanislaus. Having lived in the Central Valley of California for the past six years, Ann misses the camaraderie and time spent with fellow Ford Scholar Alumni, but she is grateful for the opportunities to teach people whose backgrounds are quite like her own. Ann is also thankful for the opportunity to enjoy being in the presence of Kenneth Ford on many occasions all those years ago and remains grateful for the kindness, philanthropy and sage advice he extended to her.

Serena Markstrom Nugent On Aug. 31, Serena married Shaun Nugent at the John G. Shedd Institute for the Arts in Eugene, Ore, with a reception at The Oregon Cliff House on the McKenzie River. They had a short honeymoon in Puerto Vallarta, Mexico, returning in time to compete in the Eugene Community Softball League championship. She met Shaun in this league, and the two-week, double-elimination tournament at the end of the season is an annual highlight. They won their eighth title Sept. 15, scoring two runs in the bottom of the ninth to come from behind and win the game.

Annika (Wallace) Mosier Annika and her husband, Jeremy, welcomed their baby girl into the world on Feb. 11, 2013. Iris Elisabeth is happy and healthy and enjoys lots of hugs and kisses from her big sister, Ella.

Carley (Egelston) Shaut This year Carley was promoted to technical director at the Oregon Health and Sciences University Laboratory of Immunogenetics and Transplantation. She received board certification and national accreditation as a lab director in histocompatibility. Along with career success, Carley and her husband enjoy being parents to their sweet toddler, Brooke.

Jennifer (Fanyak) Pappalardo Jennifer received her Master of Business Administration degree in sustainable business with a concentration in government policy and administration from Marylhurst University in December 2012. She and her husband, Mike, have a three-year-old daughter, Grace “Gracie” Anne Pappalardo, and happily live in Eugene, Ore.

Tyler Smith Tyler holds the position of chief technology officer and was recently elected chairman of the board of directors for Matson & Isom Technology Consulting in Chico, Calif.

Danielle (Quimby) Currey On June 29, 2013, Danielle graduated with a doctorate of naturopathic medicine and plans to begin practicing primary care medicine as a naturopathic doctor in Gresham, Ore., in November.

Todd Gifford Todd’s first daughter, Emma Bliss Gifford, was born Jan. 26, 2013. Mom and baby are healthy and happy. His two boys are now 14 and 17 years old. He says that starting over as a new parent at age 40 is pretty great! Todd’s southwest Portland dental practice, Gifford Family Dentistry, is growing so fast that he is now looking at a major renovation to double the number of dental chairs in the office. His term as president of the Oregon Academy of General Dentistry ends in October, and he looks forward to a new phase in life where he can devote more time to playing with his kids.

Nathan Hodges Nathan earned a master’s in landscape architecture from University of California at Berkeley in 2008 and moved north to Lopez Island, Wash., to work on storm water and shoreline projects with a small non-profit. Nathan and his wife have also started Barn Owl Bakery, an artisan wood-fired bakery on Lopez Island. They are busy growing vegetables, raising chickens and pigs and watching in amazement as Eden Luna, their 15-month-old daughter, learns to walk and talk.

Geoff Winkler The Association of Certified Fraud Examiners (ACFE), the world’s largest anti-fraud organization and leading provider of anti-fraud training and education, awarded Geoff, of Portland, Ore., the Certified Fraud Examiner (CFE) credential. In order to become a CFE, he met a stringent set of criteria and passed a rigorous exam administered by the ACFE. Geoff successfully met the ACFE’s character, experience and education requirements for the CFE credential, and has demonstrated knowledge in four areas critical to the fight against fraud: fraudulent financial transactions, fraud prevention and deterrence, legal elements of fraud and fraud investigation.

Lucy (Edwards) Berger Lucy married Michael Berger on April 13, 2013, at St. Mary Magdalen Church in Orlando, Fla. She works in event planning for a non-profit and teaches Zumba at LA Fitness. Michael is a personal banker at PNC Bank and enjoys bodybuilding at the gym. The couple honeymooned at Fort Myers Beach, Fla., for one week before returning to the Orlando area where they reside.

Nicole Blalock Nicole received a Master of Arts degree from Native American Studies and a Ph.D. from the Graduate Group in Education at University of California, Davis in 2013. She holds a postdoctoral fellowship in educational equity at the Arizona State University Mary Lou Fulton Teacher’s College.

Trisha Bergemann With the financial help of the Foundation and the support of her family, friends and employer, Trisha finished a Master of Social Work in June. She is also getting married this October.

Teresa Gomez Since graduating in 2005, Teresa has worked in different places but has always worked and supported families that have children with special needs, especially Latino families. In 2010, she went back to school and earned a master’s in early intervention/early childhood special education. She graduated in 2012 and was recently hired as an early intervention specialist. This is her first year teaching.

Julie (Stumph) Hedford Along with working as a staff registered nurse and lactation consultant, Julie was promoted to charge nurse of her department in January and now has many administrative duties. She began graduate school at Oregon Health and Sciences University Nursing Master’s Program this fall. Julie and her husband are also preparing for the arrival of her disabled mother from Texas.

Karla Neuschwander Since graduating with her teaching license in 2008 from Western Oregon University, Karla has gone back to school and earned a master’s degree and started her fourth year of teaching at Double-O Elementary School in Hines, Ore. She always had a goal to return to Harney County where she grew up and teach in a one-room school house. It has been exciting for Karla to live out this dream at the Double-O school. She is the only teacher and has gotten experience teaching kindergarten through eighth grade. There have been many challenges but it has been a fun journey for her so far.

Robyn Perry After four years of working for the Progressive Technology Project in Minneapolis and building a community in the Midwest, Robyn recently began a two-year master’s program at University of California at Berkeley’s School of Information. She studies natural language processing, data visualization, techniques for using public data, data mining and more. She’s both coming home and starting anew all at once.

Rachael (Swafford) Gies Rachael married Vincent Gies in March. She has worked as an elementary music teacher for the Newberg School District for past three years. She recently became a middle school beginning choir director as well.

Karla Rascon-Garcia After more than four years of perseverance, Karla finished her undergrad at California Polytechnic State University, San Luis Obispo in July 2013. During her time at Cal Poly, she was able to go to Mexico, the United Kingdom, Mozambique, Uganda, Brazil and South Africa. School brought Karla deep personal growth and has expanded her whole world. She has applied to one grad school in Brazil and will return to Brazil for interviews in October and hopes to move to São Paulo in 2014 if accepted.

Corby Makin This summer, Corby went on a trip to Bungoma, Kenya, with three fellow medical students. They volunteered at a community health clinic and a public grade school. At the clinic, he got to vaccinate newborns, council expecting mothers and treat diseases ranging from malaria to HIV. This experience has been invaluable as he pursues his career as a physician and has been very motivating for him. At the school, he helped teach almost 1,200 students, an overwhelmingly rewarding experience for him. Corby hopes to return to Bungoma.

Caleb Trowbridge Caleb graduated from Oregon State University in March and took an internship at Sunriver Resort for the summer. He recently accepted a full-time position with Western Fire Chiefs Association in Wilsonville/Salem, Ore.

Alicia (Howard) Trull Alicia married Brogan Trull on June 16, 2013, in Coos Bay, Ore. She is a community health nurse for the Multnomah County Health Department. Brogan is studying at Portland State University to be a special education teacher.

Samantha (McSharry) Vincent On Nov. 8, 2012, Samantha and her husband, Mitch, welcomed their first child, Porter William Vincent, who was 7 pounds, 3 ounces and 19 inches long. The family is happy and healthy as can be.

Mandy Elder Mandy has a Fulbright research fellowship and lives in Oaxaca, Mexico. Reflecting on her own experiences, her research focuses on young women from rural communities who are first-generation college students and how they navigate issues of identity and community belonging as they transition to university. Having this experience in Oaxaca has helped her develop language skills, leadership capacity, grow academically and personally, and solidify her dedication to promoting educational opportunities in marginalized communities.

Keith Fakhoury Keith was the first student from Willamette University to attend the Global Pre-MBA Leadership Program at Yale School of Management while interning at J.P. Morgan Private Bank this summer. He studied abroad in Dubai for the entire academic year before going to the East Coast for the Yale program.

Elise Heidy After graduating in May of 2013, Elise began working within her field as a social worker at a treatment facility for high-risk youth. Although she received a degree in social work, her heart and passion has always been deeply rooted within the mission work God has called her to be a part of in Northern Uganda. On Aug. 28 she moved to Uganda, where she will serve in the northern region called Karamoja, sharing and spreading the gospel. Her degree will play a big part in her ministry. Visit her blog: www.eliseheidy.blogspot.com.

Y- Thien Hoang Y graduated from the University of Portland this spring with a degree in biochemistry. She passed the citizenship test and became a U.S. citizen in June. Y attends Oregon Health and Sciences University’s School of Dentistry with hopes to attain a Doctor of Dental Medicine degree and become a dentist in four years. 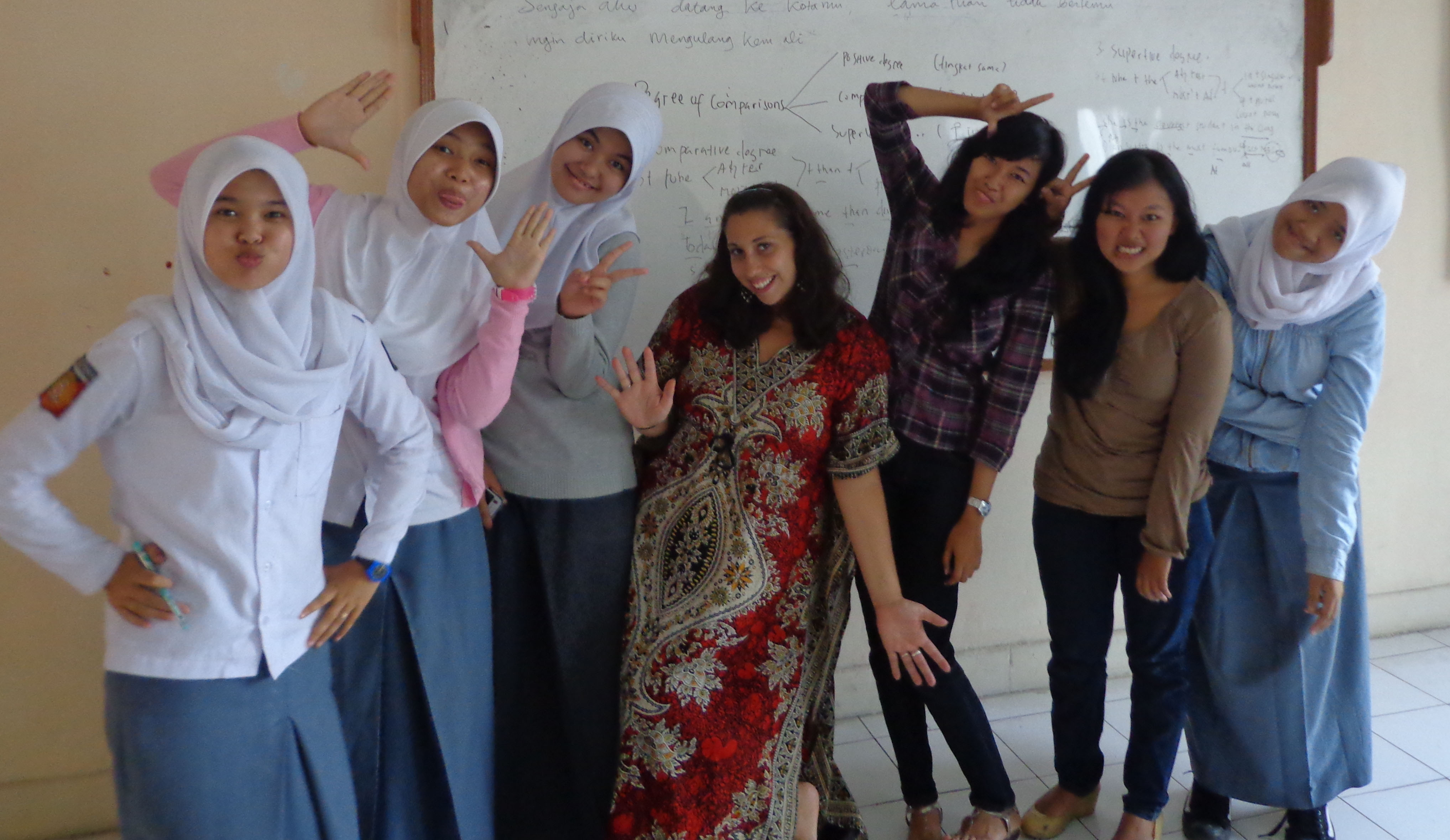