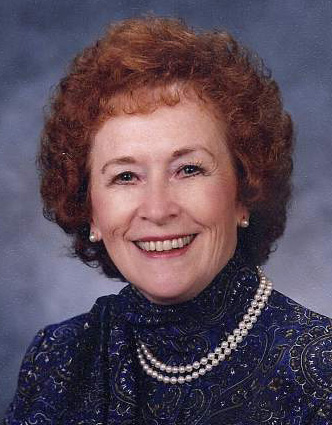 She was an enthusiastic supporter of all of the Foundation’s work – especially the scholarship students.

Ford’s son, Mike Stanley, shared his gratefulness with the Foundation, thanking them for including Scholars in the memorial service and for the “touching and heartfelt memory book, which my family and I will treasure,” he said in a thank-you note.

“The Scholars Program occupied a very special place in her heart, and I think she saw herself in the many deserving students who have benefited from Kenneth’s legacy,” Stanley wrote. “I know you all have a strong sense of the importance and enduring value of the Foundation’s mission, a sense that she shared.”

Stanley and his wife, Natalie, have two children, Rose and Max, and live in Juneau, Alaska.

She earned a bachelor’s degree in food and nutrition from the University of Idaho in Moscow. She married Allen Stanley of Idaho in 1950. Their only child, Michael, was born in Kandahar, Afghanistan, in 1951.

The family settled in Pasco, Wash., a year later. She worked as the head dietitian at a hospital there and was active in civic affairs.

She later worked as a dietitian for several hospitals before coming to Roseburg in the 1970s, by which time she was single. She met Kenneth Ford, owner of Roseburg Forest Products, and they were married in 1982.

She was active in civic and charitable organizations in Roseburg and enjoyed traveling.

After her husband passed away in 1997, Ford continued to participate in Foundation events as long as she was able.

“She was a faithful emcee of the Ford Scholars Leadership Conference talent show and never missed a chance to remind a Scholar to take off their hat inside a building,” she said.
By Holly Scholz
Editor