How do you say good-bye to a great leader who’s made a difference in your life, helped you achieve so much and is your amazing friend?

A flash mob – dancing like there’s no tomorrow – that’s how you give a one-of-a-kind send-off to someone who will be missed.

Rennick, who joined the Foundation four years ago as the director of scholarship programs, accepted a position as executive director of the Beatrice Community Hospital Foundation in his home state of Nebraska. His last day with The Ford Family Foundation was May 11, 2012.

“It was awesome,” Rennick said of the party. “I was really touched by the turnout of Scholars and other well-wishers.”

The whole idea of a flash mob came about when his co-workers Ashley Stripling and Shamra Clark were chatting about how to say farewell. “Ashley mentioned a flash mob as a joke,” Clark commented, but Clark ran with the idea.

Clark recalled Ford Scholar Isauro Saldana from the Class of 2008 being a great dancer at summer conferences, so she called him up. He lives in Eugene and was finishing up his bachelor’s degree in business and commerce from the University of Oregon.

Saldana loves to dance and worked at dance studios and even taught dance to school kids. He choreographed a three-minute flash mob one afternoon to the tune of “Glad You Came” by The Wanted. The Scholarship Office gals filmed Saldana teaching the moves and posted the video on YouTube. Eugene-area scholarship recipients were invited to learn the dance and secretly show up at the Scholarship Office parking lot for the surprise flash mob.

“We’ve practiced so much and know so little,” said Class of 2010 Ford Scholar Emily Gritzmacher with a laugh.

After a couple of practice rounds, the flash mob was ready.

When Rennick arrived in the back parking lot, Saldana and his dancing friend Brittney Walker did a 90-second dance, followed by the flash mob of dancing Scholars. At the end of their 90-second performance, they held up signs with messages to Rennick.

“I never saw it coming,” Rennick said after the party. “I had no idea!”

The mob then moved indoors for cake and punch.

Rennick said he loved being a part of the Foundation, but the opportunity to return to Nebraska and be close to family was a major factor in his decision to leave.

“While I miss the staff and all the Scholars I’ve had the good fortune to meet, I am excited by the challenges ahead,” he said.

Rennick describes his new town of Beatrice, Neb., as a dynamic and progressive small city positioned well to thrive in the years to come. He hopes to use some of the things he’s learned about creating successful citizens and vital rural communities in his work with the hospital foundation.

Rennick hopes Scholars will actively seek to “unleash the power of others” as one of their primary goals in life. “And always act in a way that would make Kenneth Ford proud.”

Even if it is dancing in a flash mob. 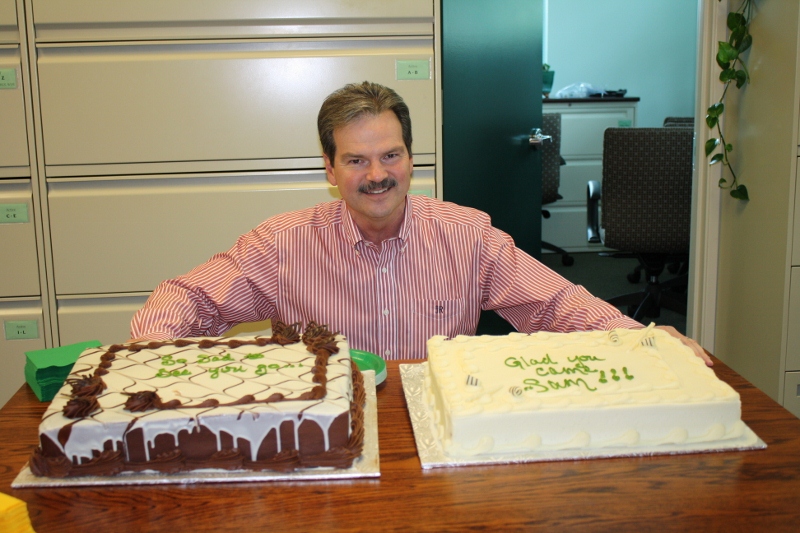