Bruce was a very close friend of Kenneth Ford’s and one of the founding directors of the Foundation. He inspired others with his commitment to community, to giving back, to stewardship and leadership, and his belief that every young person, with a college education, could make a difference in the world.

As an entrepreneur, risk-taker and successful businessman, Bruce’s life was about recognizing possibilities. He saw in Scholars the potential they had to make positive differences in their communities. Unfortunately, Bruce passed away in 2002 after a valiant battle with cancer.

In living memory of Bruce’s life, full of “giving back” to his community, this award is given to Ford Scholar Alumni who shoulder community leadership responsibilities without concern for getting credit, and who exhibit steadfast loyalty to the Foundation’s core values of integrity, stewardship, respect, independence and community. In short, award recipients are actively committed to changing things for the better.

Gifford graduated from West Albany High School in 1990. Not long after high school, he signed on for a six-year enlistment in the Army Medical Corps and in 1998, was honorably discharged. The following year, Gifford began his academic career at Linn-Benton Community College and upon earning an Associate of Science degree was selected as a Ford Scholar and headed to Oregon State University.

Today, Gifford is the owner of his own dental practice, Gifford Family Dentistry, in the Hillsdale community of Portland and is a part-time faculty member at Pacific University School of Dental Science.

He has worked hard to make community service a large part of his doing business. He and his staff recently volunteered on the Oregon Dental Foundation’s Tooth Taxi, the Oregon Mission of Mercy, and Project Homeless Connect in Hillsboro. Through these outlets, he has contributed to providing free dental care for Oregon’s underserved children and adults.

Another project that is near and dear to Gifford’s heart is that of the Hillsdale Main Street Program, whose mission is to improve their community by making it a better place to live, learn, work and shop by promoting the development of the community’s infrastructure and resources.

This award is accompanied by a grant of $5,000 from the Foundation to the Hillsdale Main Street Program. The funds will be used to further their mission, including various outreach projects and/or marketing campaigns that reach individuals and families seeking to play a more active role in the community.

Gifford has enjoyed many positive experiences with the Foundation. “I find being associated with this organization that is so dedicated to doing good in the community inspires me to do the same.”

The second Gerald E. Bruce Award co-awardee is Tyler Smith, a Siskiyou County Ford Scholar from the Class of 1998.

Smith is the chief technology officer at Matson and Isom Technology Consulting, an IT consulting service provider in Chico. He helped to rebuild the organization and in the process secured partial ownership of the venture.

Smith has been a dedicated member of the Ford Scholar Alumni Association. For the past 10 years, he has volunteered many hours creating and maintaining the FSAA’s website, including the voting process for alumni board member elections, donations and alumni conference management systems, and the Gerald E. Bruce Award online application process.

Smith said it is a tremendous honor to be selected for this award.

“I’ve always considered the Ford Scholars Program to be an investment,” Smith said. “I still wear my Ford Scholar Class of 1998 ring every day to remind me of the opportunities I’ve been afforded, and work to provide opportunities to others in any way that I can.” 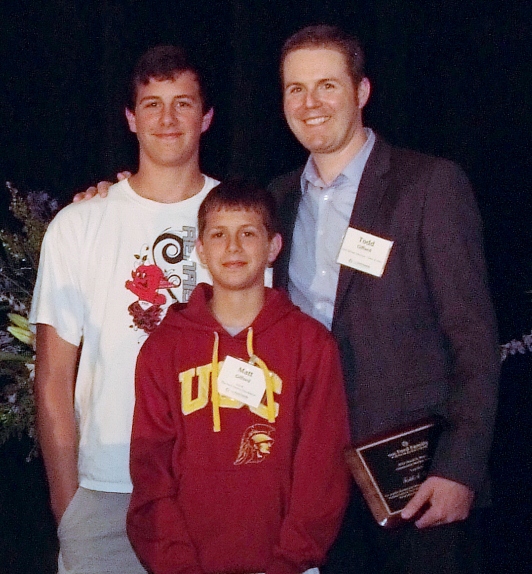